About us
Help Area
My login

Domains
Create a Homepage
Hosting
SSL
Reseller
Reseller
Register a domain You have the idea, we have the right domain
All domains Over 950 domain extensions from all over the world
.de Domain
.com Domain
.at Domain
.eu Domain
.net Domain
.org Domain
Create your own homepage Own homepage without programming knowledge
Hosting Domains, emails and databases
RankingCoach Quickly and simply to the top on Google
Domain Reseller Listings for wholesale and reseller
Customer area Webmail

Maximum security with an SSL certificate

Secure SSL-connection
All data such as passwords, credit card numbers and contact details are sent encrypted.
Protect yourself with our SSL certificates

When do I need a
SSL certificate?

SSL stands for "Secure Sockets Layer". By using an SSL certificate, the data that is transmitted to your computer, for example when a website is called up, is encrypted.

As soon as you collect information from your customers on your website, e.g. via a contact form or within a shop system, you are obliged according to DSGVO to transmit this data in encrypted form.

Will find better with an SSL certificate

Already in August 2010 Google announced that SSL encrypted pages can achieve a better ranking in the search results.

In our intuitive customer area you can easily assign the SSL certificate to your domain with a click. The domain is secured immediately, your pages are immediately accessible via HTTPS protocol.

Assign a domain SSL Simply connect a domain that you want to protect with our SSL certificate.

5 good reasons for
our SSL certificates

After order
immediately available!
We take care of the technical setup in the background. Your pages are encrypted immediately after activation of the SSL certificate.

Trust
An SSL certificate tells your visitors that you care about their privacy needs.

Highest security
according to ISO/IEC 27001
Our data center meets the highest safety standards. The certificate confirms adequate safety management and high availability of all IT systems.

Personal
expert support
If you need support it? We are happy to help. Our trademark: The fantastic support - personally, individually and competently.
Maximum security with
an SSL certificate

What is an SSL certificate?

Doch was ist mit dem digitalen, uferlosen, dazu noch vollkommen anonymen Internet? In Chaträumen nehmen die Personen wie selbstverständlich andere Identitäten an und erzählen fantastische Lebensgeschichten. Organisierte Betrüger locken ahnungslose Bankkunden auf täuschend echt gemachte, nur leider gefälschte Webseiten und versuchen so, an die PINs und TANs des Nutzers zu kommen, um mit ihnen sein Girokonto leer zu räumen. Drahtlose Netzwerke, sogenannte Wireless-LAN, offenbaren jedem, der einen eigenen Computer dazwischenhält, was gesendet wird - die Funksignale sind durchweg im Klartext, also unverschlüsselt, werden wie binäre Morsezeichen weithin hörbar wie eine Rundfunksendung öffentlich ausgestrahlt und laden zum Raub der Identität förmlich ein.
Does it have to be like this?
No. The first step towards data security was the introduction of "HyperText Transfer" in 1994. Protocol Secure". The user recognizes it in the address line of his browser window: there the domain or the entered website name is no longer preceded by "http", but by "https", Depending on the manufacturer, usually combined with a symbolic padlock or with a with a striking color. HTTPS works - because the necessary protocols in the browser software are already installed at the factory - on practically all Internet-enabled computers and does two things: it usually encrypts the data to be transmitted at 128- or 256-bit level, without the need for additional software on the computer, and checks whether the partner is actually the one he pretends to be. This "authentication" makes it difficult to Phishing attacks by redirecting to reconstructed websites are of course uncommon.

Consequently, just financial institutions rigorously wrap the whole Internet banking traffic HTTPS server, auction houses at least the registration of the user, while the transaction data to increase the calculation speed without coded additional measures can be transmitted. Other shops, on the other hand, leave it to the user to decide whether he wants to encrypted over HTTPS or unencrypted over HTTP.

SSL comes into play when connecting via HTTPS server. SSL stands for "Secure Sockets Layer". and can be reasonably translated as "Safe Connection Layer". Simplified representation the following happens: a second connection named "SSL Record Protocol". This pure recording protocol provides the encryption between both computers and checks whether the data that is entered on one side is exactly on the other hand, by regularly leaving the sent data, the data, add the check digits and compare the value at both ends of the connection.

Before the first data is exchanged, the "SSL Handshake Protocol" (named after the handshake to greet) transmits the personal identification data of the participants and negotiates both the fragmentation and encryption method to be used during the connection. In other words: both computers agree on the code and the uniform size of the data packets to be transmitted. From now on, coded bits of information flow through symmetrical algorithms (i. e. sender and receiver use one and the same procedure for encrypting and decrypting), which the receiving computer decodes, assembles and makes readable for the user.

Handshake" is where the SSL certificate appears. It is a kind of digital identity card issued by a Certificate Authority (CA) and a publicly accessible Signature verification key of a specific person, or organization is assigned. This assignment is made by the certification/registration body by adding its digital signature to the certificate as well. In other words, if someone uses a certain code on the Internet, then can be clearly deduced from the composition and confirmed who he is.

Since the question of whether such identification is sufficient and whether a digital signature is appropriate in legal transactions to the confirmation of the declaration of intention is to be recognized, also from of extraordinary importance from a legal point of view - after all, the Internet is not intended to be a "Rechtsfrei Raum" - regulates in the Federal Republic of Germany the following the Signature Act of 2001 together with the Signature Ordinance all questions concerning SSL certificates and digital signatures.

The regulatory authority and supreme certification body is the Federal Network Agency, which for its part already further accredited (thus state examined and with quality mark certification bodies - mainly the chambers of lawyers, notaries, tax advisors and auditors, but also private law Companies such as Deutsche Telekom, Deutsche Post and DATEV were granted approval.

If you want to establish yourself on the market as a private "certification service provider" - as the correct term suggests - you have to start your business with the Federal Network Agency, but otherwise does not require any further permits. However, he must prove that he possesses the necessary reliability and expertise, also a liability insurance with a coverage of at least 250,000 euros per claim.

My question is not included
How do I recognize SSL secured connections?

The certificate authority Let's Encrypt, which is mainly funded by the Mozilla Foundation, Google and Cisco, aims to make encrypted HTTPS connections the norm by offering free certificates. In the long run, this could lead to an increase in security and data protection on the internet.

In cooperation with this certificate authority (CA), we try do our part in securing the internet and sharing the benefits with our customers through our services - 100% free.

Where can I find an SSL certificate?

Our support team is ready to guide you through all the steps involved, be it technical requirements or necessary details. The required proofs or documents, ranging from a simple email confirmation to a copy of the trade register excerpt or the business registration, depend on the selected certificate.

Important: web hosts should ensure that they make a professional impression by opting for an SSL certificate from a trusted and well-known certificate authority such as Comodo. So-Called "self-signed certificates" which are offered for free do little to increase the user's trust.

Where is the SSL certificate installed?

The certificate is installed on the respective server which hosts the domain connected to the certificate. When a customer with a checkdomain hosting plan orders an SSL certificate, we take care of its installation - so you can sit back and relax. Concerning external certificates, i.e. ones ordered directly from a provider, please get in touch with your server administrator or web host beforehand.

In whose name do I order an SSL certificate?

When ordering an SSL certificate, it is important to check whether the company records correspond to the records for the domain owner at the relevant domain registrar for the domain in question. A WHOIS request is helpful to clarify whether the provided details are correct.

How long is an SSL certificate valid for?

Depending on the certificate, the period of validity can last from 90 days up to 2 years. The option of an automatic renewal is always included. A crucial point for the trustworthiness of a website is the validity of its SSL certificate. If the certificate is expired, the user will be shown a safety notice - this could deter potential customers.

We will be happy to help you

"Hello, my name is Matthias Franke! Together with my team we provide a Fantastic Support which is appreciated and loved by our customers" 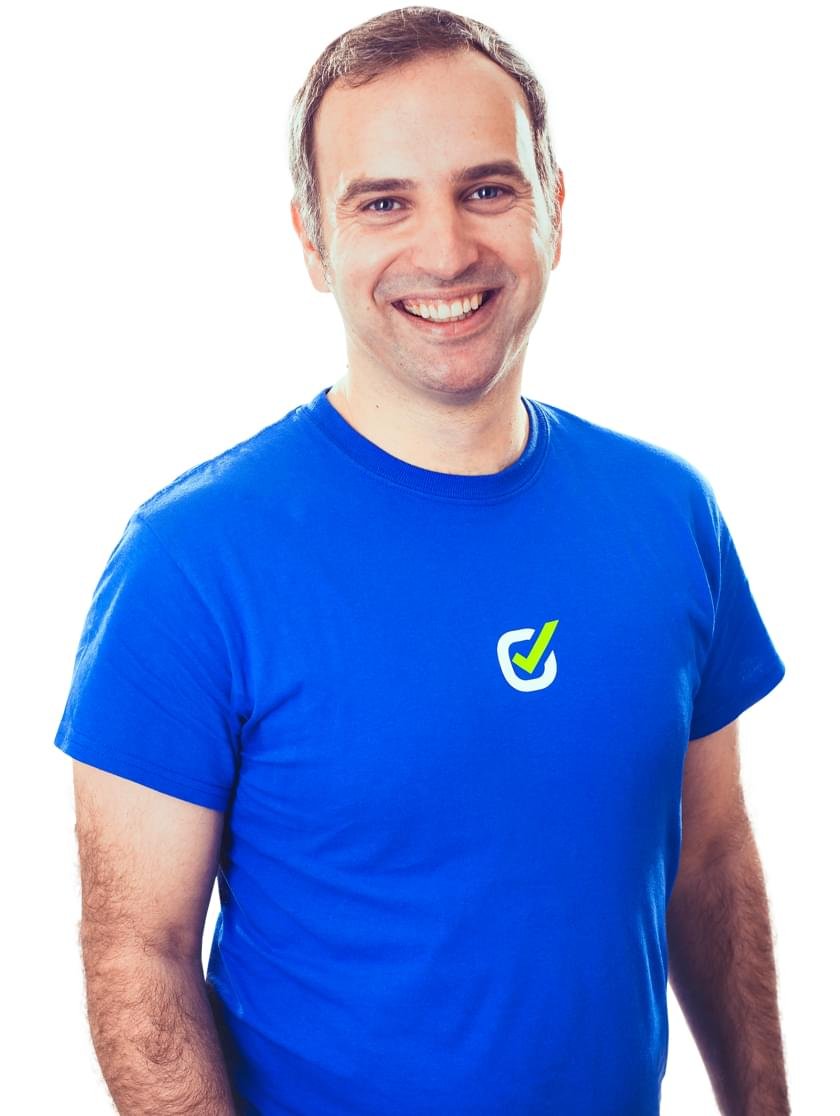 Domain search
There are approximately 800 domain extensions from around the world available.
Domain name search now